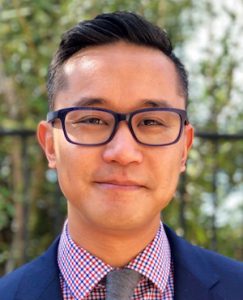 In 1999 during his sophomore year of high school, Carl Soriano moved to San Marcos, CA from Chula Vista, CA where he quickly became involved with the SMHS marching band. During his time at SMHS, Carl was the trumpet section leader and also performed with the jazz band. Carl Soriano graduated from San Marcos High School in 2001.

After graduation, Carl joined the Esperanza Drum and Bugle Corps, marching from 2003-2004 in Drum Corps International (DCI) and won the Division 2 Championships in 2003. In 2005, he joined the Concord Blue Devils and competed in both DCI and the World Music Contest, a European drum corps contest with over 300 music groups from 30 countries.

After his drum and bugle corps career, Carl attended San Diego State University where he obtained a Bachelor’s of Science degree in Business Administration with an emphasis in Information Systems Management. After college, he worked for San Diego Gas and Electric for 10 years as a Principal Business Systems Analyst. While working at SDG&E, Carl also attended Pepperdine University and obtained a Master’s in Business Administration with an emphasis in Leadership and Change Management.

After completing his MBA, Carl returned to his alma mater to pursue his passion for marching band and was given the opportunity to volunteer and coach alongside an incredible staff and talented students as a Visual Instructor for the Knight Regiment from 2012- 2016.

In 2017, Carl moved to Seattle, Washington where he started his own consulting company that specializes in the implementation of workforce management software applications in the Utility industry. Carl continues to pursue his passion for music by playing trumpet in local community concert bands and jazz bands.