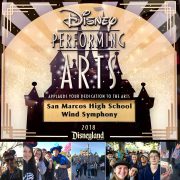 On Sunday (3/4), students from the Wind Ensemble and Wind Symphony traveled to Disneyland to participate in the Disney Instrumental Soundtrack Session.

Working with clinician Joe Alfuso, an active freelance composer, and conductor for feature films and television, the students recorded tracks from Disney films such as the Incredibles, Cars 2, Toy Story 3, Tangled, The Lion King, as well as the music for the title sequences for Walt Disney Pictures and Marvel Studios.

After the 90 minute session, Mr. Alfuso commended the ensemble for their talents and musicality and was impressed with the attention and care that the students took with every note they played.

Joe Alfuso is an active freelance composer and conductor for feature films and television.

As an orchestrator, Joe has worked with Academy Award-winning composer James Horner on The Perfect Storm, How the Grinch Stole Christmas, and on Disney’s George of the Jungle II. His composing credits include the feature film Shot or Be Shot and the television pilot The Everyday Adventures of Hanna Hendlemann, Child Genius.