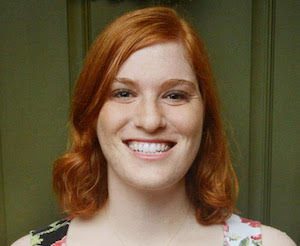 During her time at San Marcos High School Laura Schwartz (class of 2009) was actively involved in all ensembles. Throughout her four years at SMHS, she played mellophone in marching band, french horn in wind ensemble, tenor saxophone in jazz band, and mallet percussion in percussion ensemble/winter drumline. Laura took an active leadership role in the music program at SMHS: as drum major she directed the pep band and taught marching, as band president she organized the music library and presented section of the week, and as quartermaster she organized periodic band room cleanings. Beyond music, Laura was a senior winter guard member and spun flags and rifles for three years.

After SMHS, Laura attended the University of California, Davis (B.A. in music 2013). Where she studied with Laurie San Martin, Sam Nichols, and Ross Bauer. She attended Illinois State University (M.M. in composition 2015) and studied with Martha C. Horst and Roy D. Magnuson.  Currently, Laura is a Ph.D. candidate in the Music Composition and Theory at the University of Pittsburgh, studying with Mathew Rosenblum.

The music Laura writes explores indeterminacy as vulnerability, noise floors, electric fans, and egg shakers. Laura’s music has been performed at the Oregon Bach Festival Composer’s Symposium (2014), the Oregon Symposium of Graduate Musicians (2015), Nief Norf festival (2015), Yarn/Wire Institute (2016), and UC Davis Revision/(s) Festival (2018). She was artist in residence with the University of Pittsburgh Department of Physics and Astronomy (2016), culminating in System Cooling, an illustrated set of six miniatures for clarinet, baritone saxophone, violin, and double bass. In 2017 for her string quartet Wreathes (2017), Laura won The Margert Blackburn and Dead Elf awards and was a finalist for the Mivos/Kantor Composition Prize. In January 2018, she collaborated with Los Angeles Percussion Quartet Eggs for their 2018 Composer Initiative. In March 2018, her collaboration with animator Shayna Schwartz, An Anatomical Study on Escape (2018) for ensemble and live-processed projection—— commissioned by Kamratōn ensemble for their She Scores 2018 concert series— will premiere. In April 2018, a recording of her verbally notated game score, Episode 8, is set for release on Bandcamp by Pittsburgh experimental group How things are made.

Laura has worked with ensembles including: Arditti quartet, ensemble linea, New Morris code, Ekmeles, wild Up, How Things Are Made, and the Living Earth Show. Her collaborations with solo performers include: Matt Driscoll—trombone, Devon Tipp—bassoon, Evangeline Werger—piano, Sarah Pyle—flute(s), and Aaron Hydns—tuba.

Laura is also an active scholar in music theory and musicology. She has presented at various conferences including: American Musicological Society Allegheny Chapter in Cleveland, OH, “Techniques of Listening” Conference at the University of Minnesota, and the University of Pittsburgh Graduate Expo. Her primary research areas include: verbally notated scores, technologies of self, listening, and Pauline Oliveros. Laura’s dissertation research is on self-formation in verbally notated music.  For more information visit: lauraroseschwartz.com