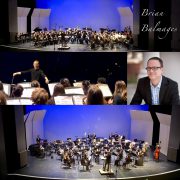 On Friday (3/23), students from Concert Band 2, Concert Band 1, and Wind Ensemble had the opportunity to perform for and work with award-winning composer Brian Balmages at the San Diego Winds Festival.  In each 50 minute session, the ensembles played two works by the composer and then spent the remainder of the time being directed by Mr. Balmages himself.
Under his expressive conducting and teaching, students gained a new understanding of the background, intent, and emotional significance of each of the pieces they played and were encouraged by Mr. Balmages to continue to reach for new musical heights.
Works performed:
Concert Band 2
Concert Band 1
Wind Ensemble

Composer Bio
Brian Balmages (b. 1975) is an award-winning composer, conductor, producer, and performer. His music for winds, brass, and orchestra has been performed in countries throughout the world. His active schedule of commissions and premieres has incorporated groups ranging from elementary schools to professional ensembles including the Baltimore Symphony Orchestra, the Miami Symphony Orchestra, the University of Miami Wind Ensemble, Boston Brass, Off Bass Brass, and the Dominion Brass Ensemble. His music has been performed by members of leading orchestras including the New York Philharmonic, Los Angeles Philharmonic, St. Louis Symphony, Philadelphia Orchestra, Detroit Symphony, Chicago Symphony, San Francisco Symphony, National Symphony, and others. World premieres have included prestigious venues such as Carnegie Hall, the Kennedy Center, and Meyerhoff Symphony Hall. His music was also performed as part of the 2013 Presidential Inaugural Prayer Service, which was attended by both President Obama and Vice President Biden.

Currently, he is Director of Instrumental Publications for The FJH Music Company Inc. in Fort Lauderdale, Florida. He resides in Baltimore with his wife Lisa and their two sons.