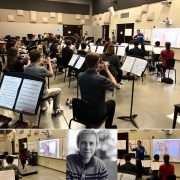 On Tuesday (3/6/18), the Wind Symphony worked with composer Aaron Perrine via Skype.  During the hour and a half session, the students learned about the background and inspiration for Perrine’s piece, Only Light, as well as received feedback on their performance and suggestions from the composer on musical interpretation.  Along with the work on the music, students also had the opportunity to ask Perrine about his own musical education and career.  It was an amazing experience and the insight gained has transformed the ensemble’s understanding and performance of the piece.

Mr. Perrine also spoke positively about the session and later commented, “Your students truly played beautifully, and I loved their openness and willingness to learn… Students like yours really give me hope for the future, and I’m so happy I got to spend some of my afternoons with all of you!”

Additional information on the piece, Only Light

Aaron Perrine’s composition, Only Light, was commissioned by the University of Iowa Symphony Band.  It premiered at the North Central College Band Directors’ National Association Conference in February 2014 and in 2015, Perrine won the Sousa/Ostwald award for the piece.  The Sousa/Ostwald Award has been awarded jointly by the American Bandmasters Association (ABA) and John Philip Sousa Foundation since 1956.  It recognizes exceptional compositions for concert band and is arguably one of the most prestigious and coveted awards in the nation.